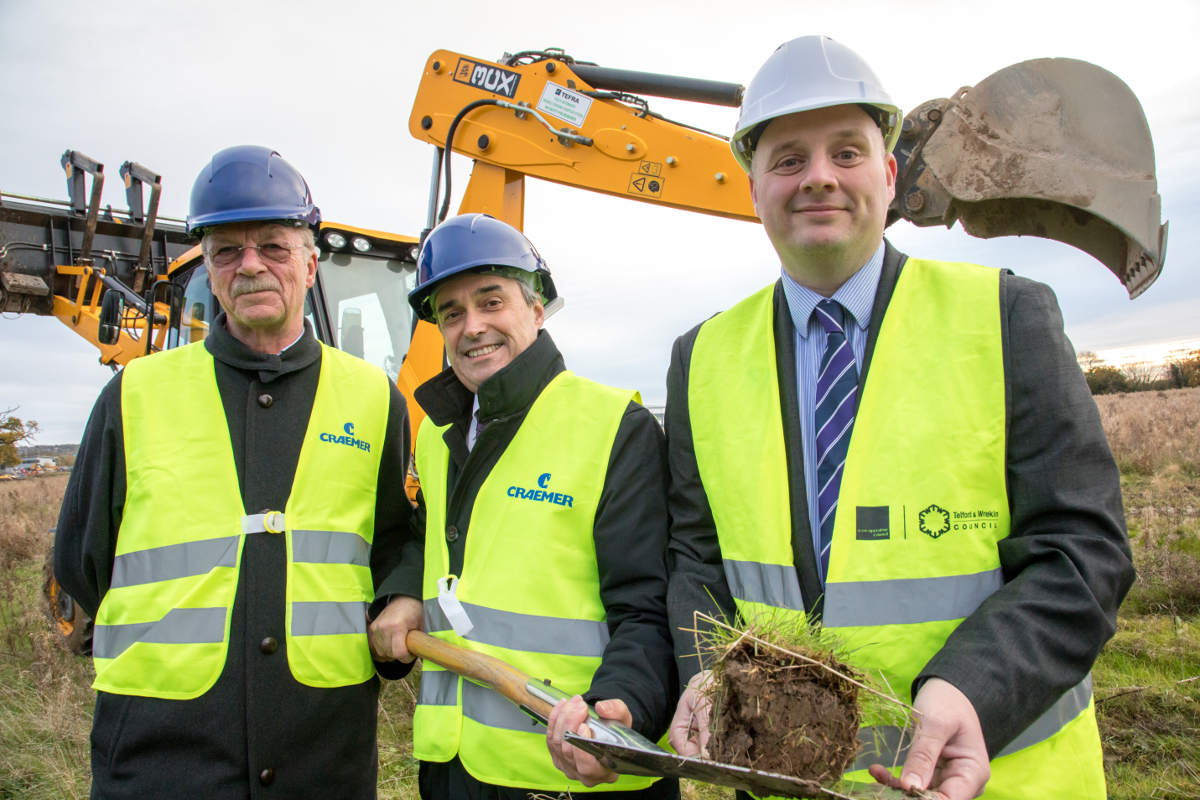 This purchase is part of the Telford & Wrekin Council and Homes and Communities Agency Land Deal, aimed at bringing forward spare industrial land for development. Since the launch of their existing Telford factory in 2006, Craemer UK Ltd has grown significantly with turnover increasing 500 per cent to £25.5 million in 2016. The company has been looking to expand its existing site in Hortonwood 1 but have been constrained by the nearby A442 and adjoining occupiers. So instead Craemer intends to develop its new factory at Hortonwood West, creating up to 70 jobs and safeguarding the 65 posts at its existing Telford site.

Dr. Achim Brandenburg, senior representative of the German entrepreneurial family and the company group’s Senior Managing Partner, said: “Our decision to build a new factory as an expansion of our existing UK subsidiary clearly demonstrates the fact that Craemer feels very much at home in Telford.”

Steve Poppitt, managing director of Craemer UK Ltd, said: “This latest significant investment by our German parent company represents an important step in the continual development and expansion of our UK manufacturing operation. We continue to build on the remarkable success and growth we have achieved since the opening of our Hortonwood factory in 2006. In addition to creating new jobs and further supporting the local economy, the development of this second Craemer Telford site underlines the Craemer Group’s ongoing commitment to its UK manufacturing arm.”

Councillor Lee Carter, Telford & Wrekin Council’s cabinet member for Economic Development, said: “I am delighted that Craemer has chosen to build a new factory in Telford and this is very typical of the inward investment that we have been striving so hard to attract. This news will create 70 new jobs, provide a welcome boost to the local economy and represents a very significant commitment to our borough by a company that is already an international success story.”

Karl Tupling, General Manager for the Midlands for the Homes and Communities Agency (HCA), added: “The Telford Land Deal is giving Telford & Wrekin Council the opportunity to take responsibility for the marketing and disposal of remaining HCA land holdings. It’s fantastic to see Craemer mark the start of work on a new factory in Telford, which is one of a series of investments helping to secure jobs in the town. This in turn means increased demand for new homes and the HCA is also working closely with Telford & Wrekin Council to develop significant housing in Telford.”

Gill Hamer, Director of the Marches LEP which secured the Marches Growth Deal, of which the Land Deal is an integral part, said: "It is fantastic to see a specialist manufacturer like Craemer chose to grow its already successful business in Telford and in doing create and safeguard a significant number of jobs. This demonstrates the rich wealth of skills available within the Marches region and will encourage other businesses to invest and grow here. However, by expanding its business on land released through the Land Deal which sees the receipts from sales of HCA land in Telford invested locally, this development will have a positive effect across the whole of the Marches."